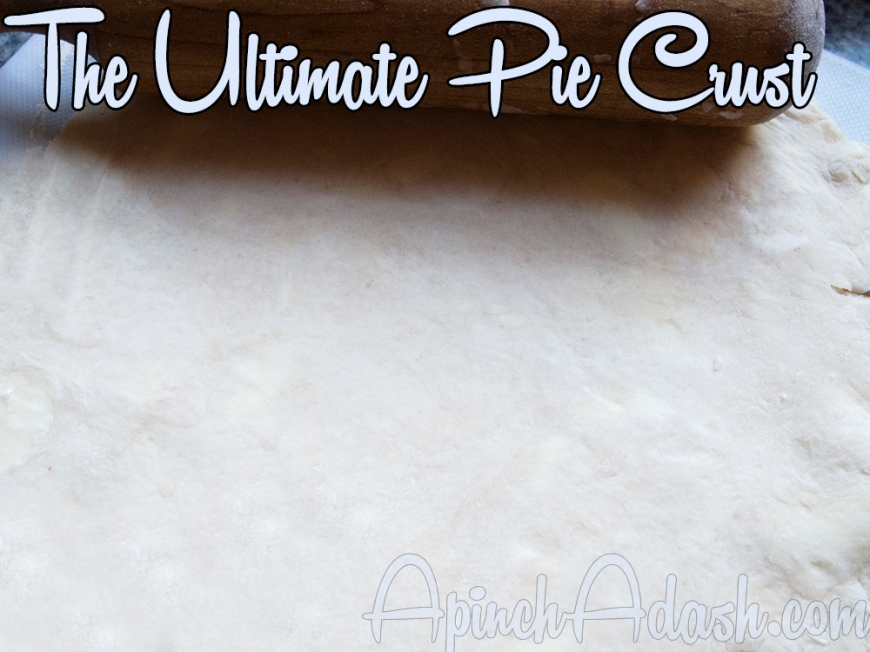 There must be about a million different pie crust recipes out there, and I’m sure I’ve tried quite a good number of them. Some were good, some were awful. But, none have ever compared to Alton Browns tender, flakey pie crust, and I don’t think they ever will. The thing that separates Mr. Brown’s recipe from the rest, is not only his pure talent, but Science. And when it comes to baking, nothing beats science. This is going to be a long post, because I really wanted to explain the steps with text and photos. Of course, I highly recommend buying Alton Browns Cookbooks, or watching his show, Good Eats, because no one explains it better than he does. However, I wanted to show you guys what I’ve learned and taken away from the recipe, as well as introduce those of you who don’t know Alton Brown yet to his genius recipe! (This crust can be used for anything from chicken pot pie to apple pie, to quiche). 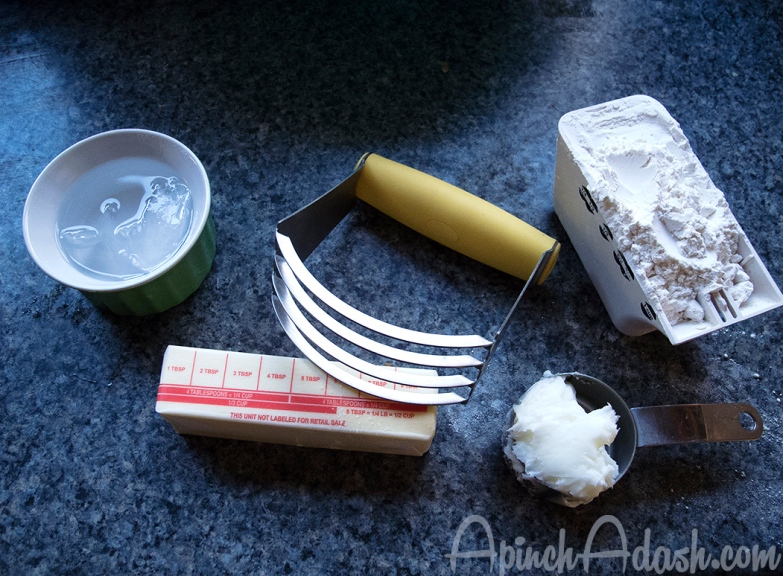 Now, to get a tender and flaky crust, you need a cold fat and a soft fat. The cold fat (butter) creates layers of fat in the dough, which gives you the flakiness. Butter also adds flavor and color to the crust, which is why crusts made with only shortening are bland. You still need shortening, though (or you can use room temp butter), because soft fat gets smoothly rolled in and coats all of the flour grains, which gives you the tenderness. 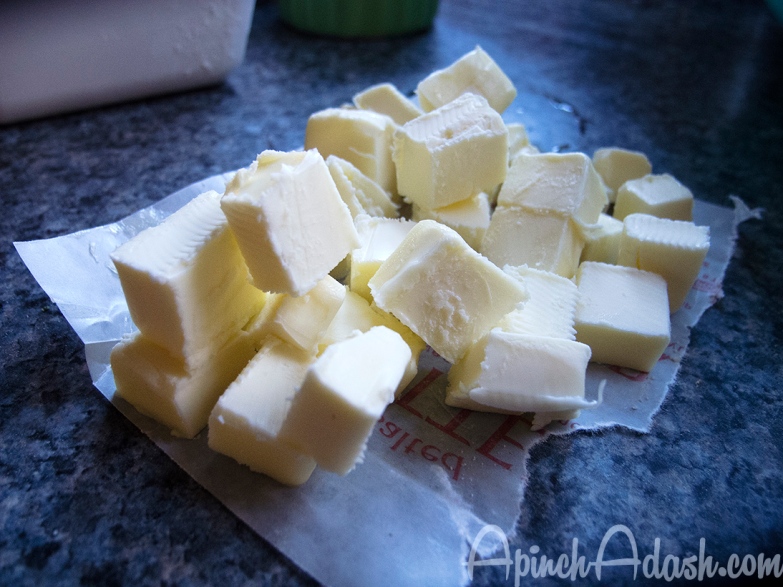 Speaking of flour, always stick to all purpose (preferably unbleached- it browns better). It has the perfect amount of protein, whereas pastry flour doesn’t have enough (its soft, your crust will fall apart), bread flour has too much (your crust will be hard as a rock), and Self rising flour will give you a biscuit, not a crust. Finally, always remember: You want to keep your crust chilled as much as possible. If it becomes over worked or warm (soft and squishy), those chilled butter pockets (flakiness) will be no more, and it may over-produce gluten, which is something we do not want (I’ll explain later).This is another reason why ice water is best. It keeps it chilled as you work. Now lets move on to the steps.

Place butter in the freezer for about 15 minutes. Cut into cubes. Sift (or pulse in food processor) the flour and salt. Add the butter and shortening. 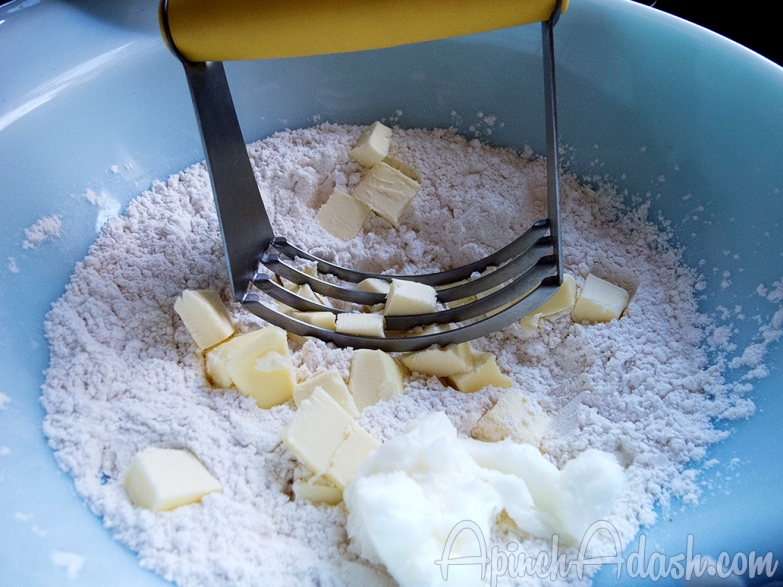 Either pulse in processor, or use a pastry cutter (pictured). 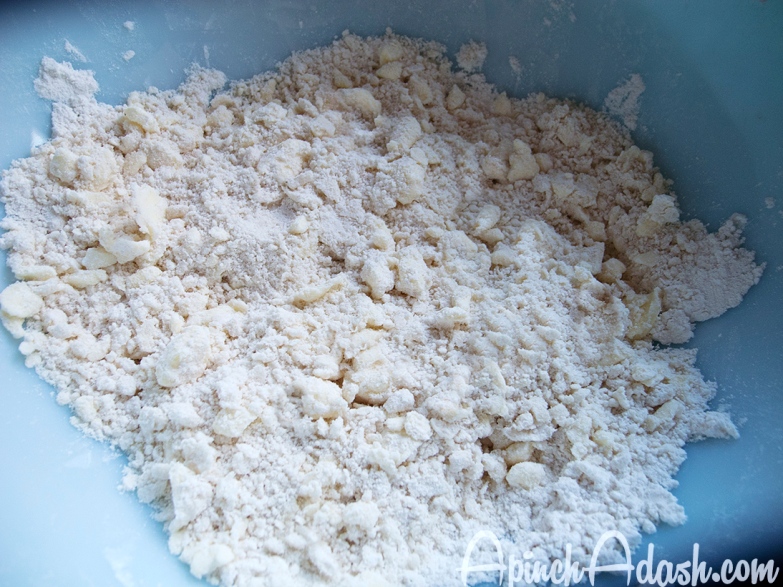 ….until you get something like this. Coarse crumbs, but some big chunks are good. Extra large pockets of flakiness! 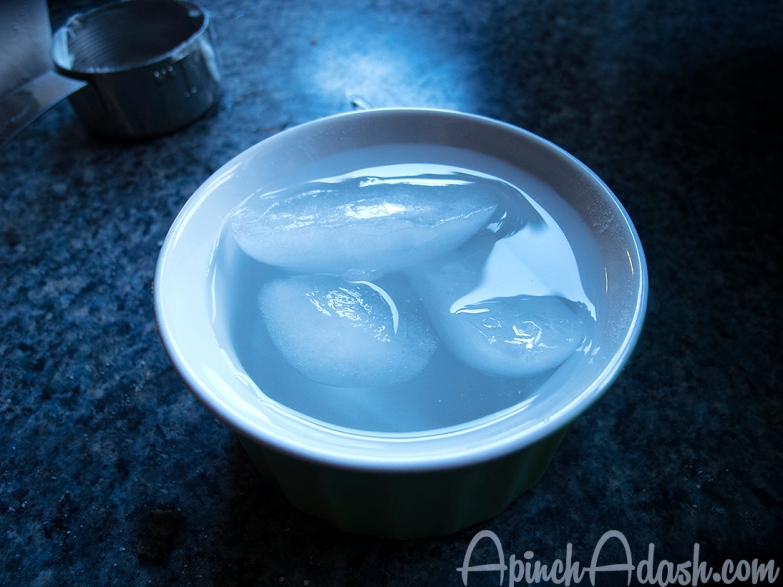 Add ice water a little at a time (A.B. recommends a spray bottle). You want to add as little moisture as possible, because the wetter the flour gets, the more gluten is produced. As Alton explains it, If you have too much gluten, it’s kind of like a bungee cord, it’ll snap back, and the crust will be half the size it was when you put it in the oven. How much water you add depends on the day. If it’s a very dry day, you’ll probably need more. 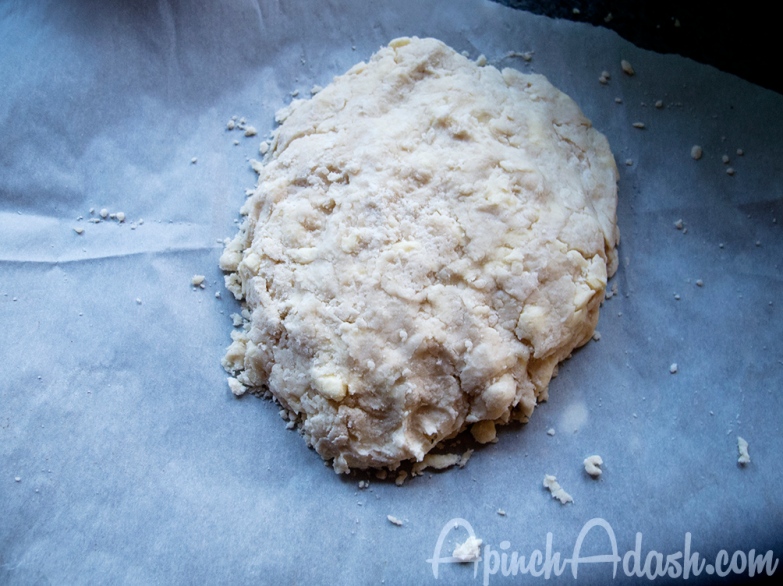 What you want, is no dry crumbs and it should mold together when you squeeze it. (but not wet or sticky). Place in parchment paper and flatten slightly into a disc. Refrigerate 30 minutes. (remember-cold is key, and we want that butter to harden up again). It also gives the dough time to soak up that moisture. So, don’t get impatient and take it out too soon!

Okay, now to roll out the dough: you want it to be 1/4 of an inch thick. If you have a hard time figuring out how to get it that thin, or how thin that is, A.B. recommends putting rubberbands at each end of the rolling pin. That will stop you from rolling it paper thin. 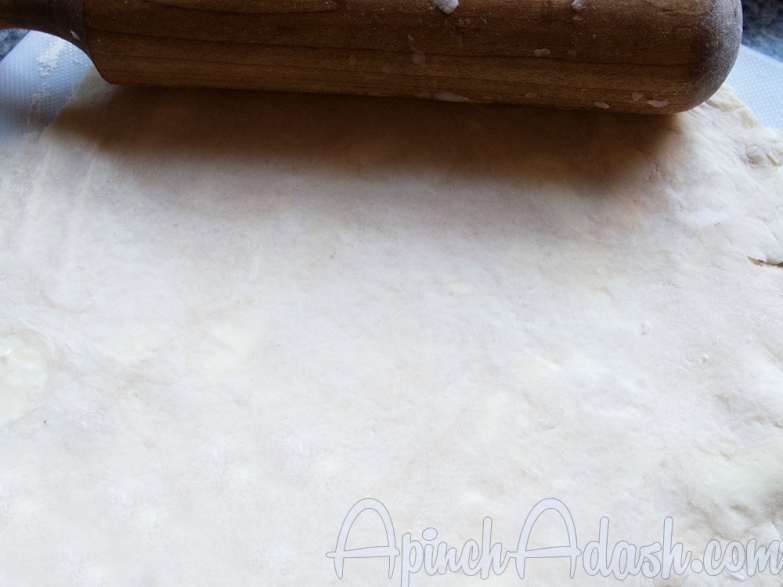 Dust flour on your work surface (cutting board, parchment paper, whatever), and place the disk right in the middle. Roll up and down, and turn the dough slightly each time (about an inch). Don’t roll the pin in all directions, or you’ll be sure to have an uneven crust. Stick to up and down, turn, up and down, turn. (Alton Tip: Keep floss handy, and if your crust sticks, use the floss to slide under and get it loose.) Again, be sure to not work the dough too much, or it’ll get warm.

Heres the trick to getting it in the pan. Place the pan upside down on top of the crust, and pick up the parchment or cutting board, flip it over. From here, you’ll add your fillings. Depending on the pie, the cook time and oven temperature will vary, and whatever recipe you use will tell you. However, this crust will most likely take a good 30 minutes before it is done.

© APINCHADASH.COM 2013. Unauthorized use and/or duplication of this material without express and written permission from this blog’s author and/or owner is strictly prohibited. Excerpts and links may be used, provided that full and clear credit is given to APINCHADASH.COM with appropriate and specific direction to the original content. Thank You!

Search A Pinch Here, A Dash There!